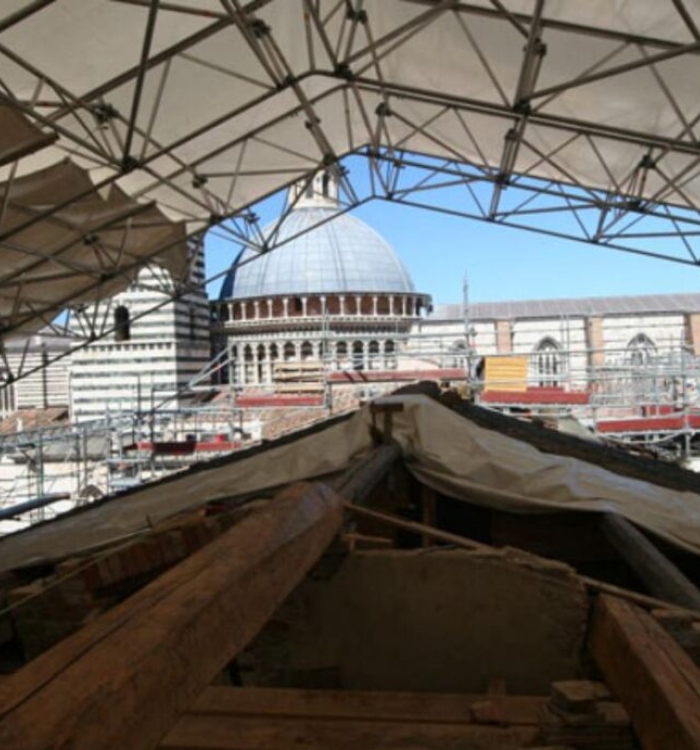 The Museum of the Opera della Metropolitana is developed within the volume of the aisle of the “Duomo Nuovo” large expansion project abruptly interrupted with the advent of the plague in 1348 and the consequent fall of the economic and political power of the Republic of Siena.
The structures of the side aisle and the new facade (the “facade”), which had already been partially built, were consolidated and readapted to different functions including the conservation of the numerous works of art.

The need to combine respect for the strong pre-existences with the use of modern materials that can guarantee maximum lightness and fire resistance, determined the choice of using traditional materials, such as handmade brick, hydraulic lime and wood, combined with fibers and resins, for the consolidation of all structural parts to be preserved, and steel for the load-bearing structures to be reintegrated or replaced.

The original cross vaults of the loggia were thus consolidated with an intervention on the extrados through the laying of a lattice with resin reinforcement and structural mortar based on lime, maintaining the signs of all the workings that have taken place over the centuries: holes for pulleys, openings for supporting lamps, etc.

The new roof was made entirely of steel with pre-assembled lattice girders on foot and completed with a suspended passageway for crossing the attic space. The finishing mantle was restored by reusing tiles and ornamental roof tiles, and the entire eave overhang was reconstructed with wooden rafters, handmade mezzanines, and copper channels.

Particular care was taken to remove the invasive reinforced concrete interventions placed in place until the mid-1970s.